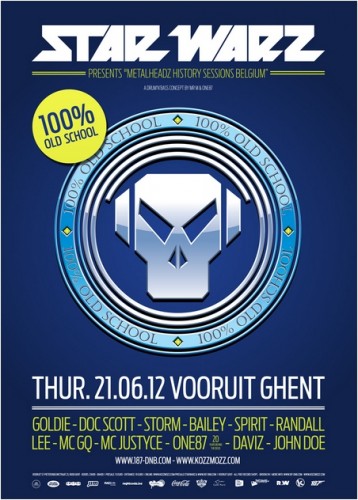 Mister M & One87 started out 12 years ago, with a very simple concept, which was creating a top quality Drum ‘n’ Bass event. Star Warz blew up to one of the finest Drum ‘n’ Bass concepts the world has ever seen, this due to top quality line ups, great artwork, a top class venue and a heavyweight sound-system. Star Warz had the honour of hosting various label nights and label’s B-days over the years as a Critical Records night, 31 Records Night, ESP Agency Show Case and 15 Years Metalheadz to name but a few. This time they present to you a 100% old skool edition, headed by Metalheadz honcho Goldie and lots of affiliated artists.

The very same people who started it all back in the ‘90’s and who are responsible for building up the Drum ‘n’ Bass scene as we know it today, will be present at this next edition of Star Warz to bring back that amazing vibe like in those magical days when it all started.

We all know Goldie is no stranger to Star Warz as we were the party that launched the ’15 Years of Metalheadz’ tour. He has a lot of respect for the parties and our crowd as we do for him. Drum ‘n’ Bass just wouldn’t be the same without his influences and all of the gifted artists he broke onto the scene. Who better could we ask to head-line this 100% old skool edition than him!

From the birth of Drum ‘n’ Bass to where it is today, from its transitions from rave to hardcore, jungle-techno to tech-step, UK based, to a global scene and industry, also Doc Scott has seen it all and been there for the entire journey. He founded Metalheadz with Goldie and it was Goldie who gave him his nickname ‘King of the Rollerz’. And off course, there is also his 31 Records, going strong since 1996!

And also Storm has always been one of the most influential DJs within Drum ‘n’ Bass, known for tight mixing skills and an exclusive selection. Affectionately dubbed the ‘First Lady of Drum & Bass,’ she represents Metalheadz at their residencies, label nights and tours as well as countless solo gigs. Having been involved from the very start of the label, Storm’s contribution has been immense and critical in helping to build the reputation Metalheadz has today.

With over 15 years since his debut, Spirit is busier than ever and still at the top his game, establishing himself as one of the world’s foremost Drum ‘n’ Bass producer. Spirit is currently working on his 2nd full-length album release, has work lined up with CIA, is returning back to the studio with Digital, and working on new releases for his own label Inneractive which includes the 10th year anniversary compilation.

Randall‘s style has always been fluid and probably always will & changes in his selection have been noticeable in the past couple of years, with more emphasis on “darkside flavas” than before. This can be illustrated crudely by his transformation from AWOL resident to a Metalheadz regular. With his labels ‘Mac II Recordings’ and ‘Step back sessions’, Randall is set to be known as a producer aside from his legendary status as a DJ.

Another name synonymous with Drum ‘n’ Bass is DJ Lee, as his involvement in the scene also dates back to the very birth of the genre. With his productions seeing releases on respected labels such as Metalheadz, 31 Records and his own Atlas Recordings imprint and a glowing reputation as a real ‘dj’s dj’, today he is another one of the most well known and respected figures in the industry.

Promotor One87 is also celebrating his 20th year as dj. this year and for this special occasion, he will be exclusively teaming up with his old time partner Daviz, with whom he played together for many years as the Millennium Kru, old skool indeed!

From Holland we also hail John Doe from the Counter Intelligence label and you can expect to be hyped up to the max all night long by MC’s GQ and Justyce. This night will definitely be nothing less than HISTORIC, so make sure you’re in!