One87 (Critical Records, Star Warz)
Another debutant for Tempo and we are proud to have him, not many dutch promoters have booked him wich is kind of strange considering his many years he spend pushing the dnb sound forwards, he’s probably one of benelux greatest and longest dnb enthousiast! So it’s time to show your appreciation for this dnbsaurier! Here’s some intro on the One87; Jurgen Vanhessche (real name) bought his first records when he was 10 years old …and started DJ’ing when he was 15; Solid breakbeats & phat basslines were the things in music that attracted him the most. Little later, One87 started playing Jungle …what became Drum’n’bass later on…which made his name well known in Belgium & beyond. After promoting his first events (starting in 1996, with guests such as Ed Rush & Fierce,) and opening his DJ-record shops Fried Chicken Records, he formed the Millennium Kru with Daviz & Mc Soul. That was somewhere in the late nineties… and was truly something else! It was one of the most skillful & diverse Drum’n’bass sound systems around. The number of high-class bookings & top residencies they did speak for themselves…And it was also around that same time that One87 created Star Warz (in association with M.K. from Kozzmozz), without a doubt the finest Drum’n’bass concept Belgium has ever seen! In the beginning of 2008 One87 decided to go solo again, with over 750 Jungle/Drum’n’bass DJ-sets under his belt. One87 has also been producing his own music lately and signed some tunes on Critical Music and Vampire Records recently. Also check out One87’s new Dubstep concept “Daily Dubstep”! More info: Starwarz Website or: 187 Website 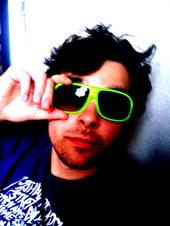 Lenzman (Metalheadz, Shogun Audio, CIA Records)
Seems like Lenzman is joining Tempo on each edition..but we are addicted to his sound! Teije van Vliet (his daily name) has just played an amazing set at the well known Metalheadz Arches event in London. Here’s some bio on Lenzman for those people who have been living on the moon for the last year.. Lenzman is one of holland’s current rising dnb stars, he made a super (understatement) remix of Total Science’s track; Soul Patrol ft MC Conrad (of LTJ Bukem’s Goodlooking fame). And his Fade Away ft Jo-S is Lenzman’s debut release for Doc Scott’s 31 Records. And he has just signed a track for Goldie’s Metalheadz label coming up in the next few weeks! So show your appreciation by attending his dj set tonight. Expect some top notch timeless Liquid music from probably one of Holland’s currently busiest dutch producer in the dnb scene and hopefully with a long musical repertoire on various other labels to come in the near future…! More info: Lenzman Myspace

Kickmansch
Previously unannounced on the flyer of the last Tempo edition so it’s time to give this vinyl junkie a proper introduction. Probably one of Rotterdam’s underrated “dubstep” dj (maybe because he’s addicted to so many music genres, house, detroit, electronica etc) it’s hard to put him in a certain box but hey…we don’t care! Kickmansch, or Kickscogs as his colleagues at Clone call him (because he’s sort of a human encyclopedia of music), will slowly turn the heat up with his foggy smoky dubstep beats. More info & mixes: Kickmansch Soundcloud

Harsh b2b Pamb (Major League, Elementz)
Tempo debut of Pamb & Harsh; both well known names within the Rotterdam and dutch DnB scene. Harsh & Pamb are known for their consistent dancefloor anthem rollers and huge supporters for DnB in Holland with their organisations Elementz & Major Leaque to push DnB to the next level. Tonight they will drop some liquid especially for Tempo! More info: Majorleague Website

Kapital (Ammunition, Optech)
One half of the now defunked Optech crew; Kapital aka Auke kruithof is debuting on Tempo. Their previously known dnb group Optech (Oskar Janssen and Auke Kruithof together) gave live drum’n bass performances and got the attention from many dnb organisations in Holland. Kapital has a wide interest in drum’n bass and motion graphics wich resulted in a vj gig for Sven Vath’s Amnsesia event on Ibiza last summer. Musically inspired by early dnb legends like Photek and Technical Itch, nowadays he produces dnb solely under the Kapital monniker with a twisted moody and atmospheric liquid sound. More info: Kapital Myspace

Denny D
In 1995 Denny started playing drum n bass when he worked in the Rotterdam based shop Urban-Unit. He teamed up with Dj Marky and started playing at parties in the area,later that year Marky & Mace from The Hague formed the Pressure-crew and Denny joined them,together with Deckjunkie and Dre The crew hosted some infamous parties and played at venues and festivals allover Holland. After that Denny kept spinning dnb all over the country and he had the pleasure of playing with some of his favourite dj’s from the UK and Holland He is known for his fluent and natural style of mixing and the music goes across the board, always with one leg on the dancefloor. In 2006 Denny started producing and decided to put the dj-ing aside for a bit. In the followingyears his focus turned to techno and he is currently producing Techno more and more. This year he is planning to pick up dj-ing seriously again and to try getting his tunes played. Hopefully we could hear some of his latest dnb productions tonight.. More info: Denny D Myspace

Fusion (Tempo)
resident and dnb pusher extraordinaire. Well known for his diverse record collection & selection wich could be described as the “Fusion” sound. Nowadays producing dnb together with dutch dnb producer Deepflow under the PRPLX monniker. Expect some PRPLX & Tempo Records releases in 2010. Those that would like to hear some of their most recent productions should check: PRPLX Myspace or: PRPLX Soundcloud And currently there’s a remix from Fusion & Kapital on Icicle’s “Time To Remember” track on Shogun Audio wich can be heard here: Icicle “Time To Remember” (Fusion & Kapital rmx) Shogun Audio More info: dj Fusion Website